What is the difference between ketosis and ketoacidosis?

Ketosis is the natural production of ketone bodies in the fasted state by the liver and kidney from fatty acids. Ketoacidosis (a.k.a. acetonenia, acetonuria, ketoaciduria, ketonuria) is the result of dysregulated pancreatic β-cell (beta-cell) insulin production. 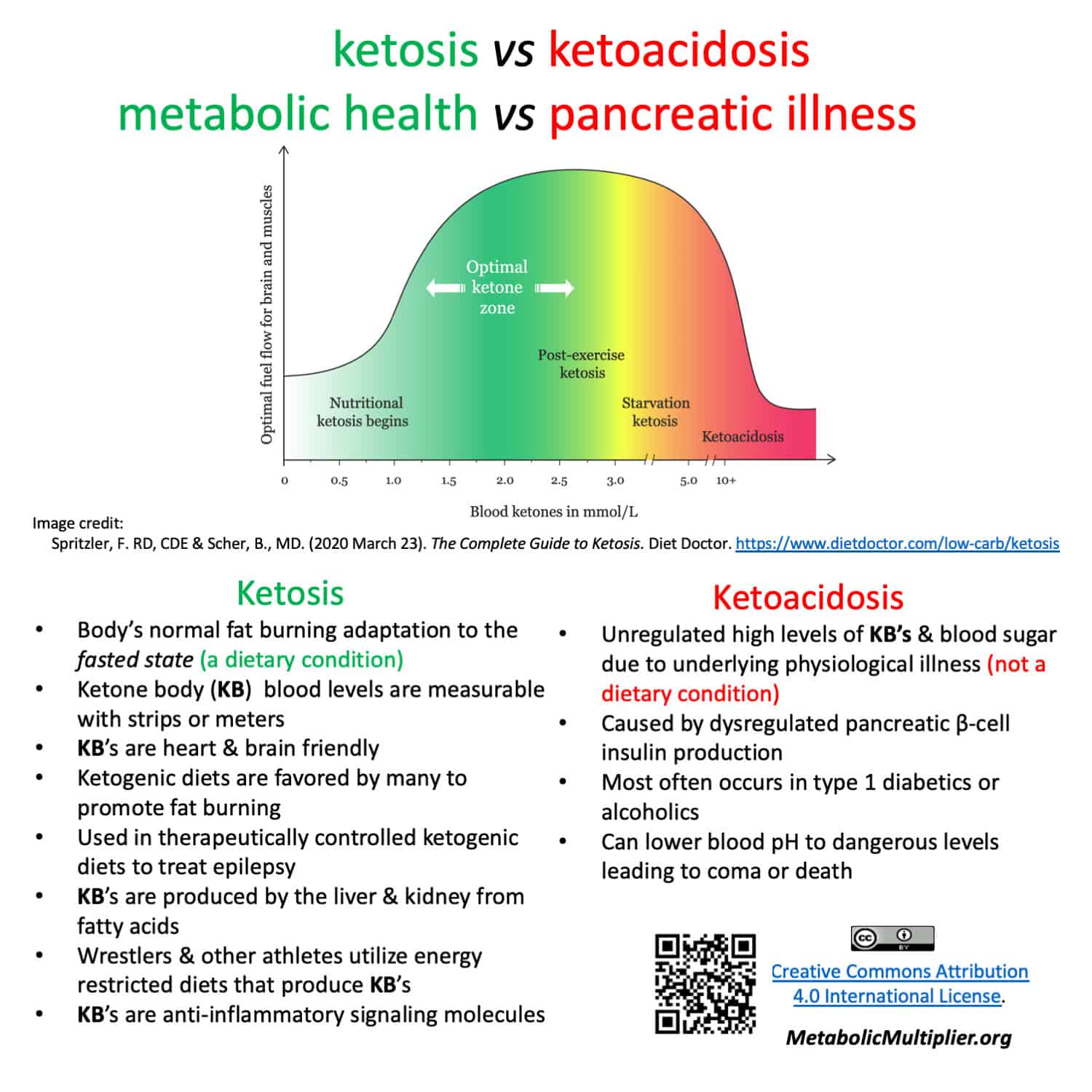 Where’s a good definition of ketosis? || Should “ketosis” fall under “ketoacidosis” in a medical dictionary? || Should MeSH modify the current search tree for ketosis? || Is a low-carb diet dangerous? || Ketosis – is it a disease or natural metabolism? | Mesh definitions | 10 weeks – Keto over MetS | Ketone Bodies – aren’t those acids instead of proteins? || Ketosis – following the MeSH tree. Is it a disease? || Ketosis – what are the MeSH preferred terms for it? || Precision or accuracy, does it matter in nutrition? | Ketosis and bio-individuality | How do you differentiate between ketosis and ketoacidosis?

Where is there a ‘good’ definition of ketosis?

I looked up “ketosis” as I was reviewing medical definitions using the US National Library’s MeSH Descriptor Data 2020.  MeSH uses ketosis as a synonym for the metabolic disease ketoacidosis. MeSH synonyms are Acetonemia, Acetonuria, Ketoacidemia, Ketoacidosis Ketoaciduria, Ketonemia, Ketonuria, and Metabolic Ketoacidosis. Differentiating between a healthy state of metabolic ketosis and a life-threatening illness, ketoacidosis, is important. Ketosis is often used both personally and therapeutically for personalizing nutrition. Would it be appropriate to ask the NIH help desk for a correction or amendment to separate the normal body function from the disease? Here is the thinking:

Should “ketosis” fall under “ketoacidosis” in a medical dictionary?

Should MeSH modify the current search tree for ketosis?

Is a low-carb diet dangerous?

Am I missing something? If your doctor believes that ketosis and ketoacidosis are the same, then he might consider a low-carbohydrate diet to be dangerous. There are many anecdotes of diabetics reversing their hypo- & hyperglycemia without ketoacidosis while reducing their need for medication. 4,5 A very low-calorie ketogenic diet (VLCKD) conducted over 4 months showed that ketosis can be an important therapy in obesity and diabetes management. 6

Ketosis – is it a disease or natural metabolism?

We knew in 1917 ketones are protein sparing?

“The protein-sparing power of fat is known to persist in diabetes. Therefore the absolute and relative increase in fat combustion now appears a sufficient explanation of the slight increment of ketonuria following any single fat meal, and the summation of such effects presumably accounts for the results of longer feeding, so that there is at present no evidence of a metabolic distinction between food fat and body fat. The relief of diabetic acidosis by fasting is doubtless due not only to diminished combustion of fat but also to a beneficial effect of undernutrition upon the assimilation of all classes of food. (Allen 1917)[Added emphasis.]7

MeSH (Medical Subject Headings) is the U.S. National Library of Medicine’s controlled vocabulary thesaurus used for indexing articles for PubMed. I use it to ensure that my writing is in consonance with current medical terminology. However, when it comes to the natural state of ketosis, e.g. where the liver and kidneys generate ketone bodies from fatty acids, there’s a conflict in MeSH.

The results demonstrated that the change over time from week 0 to week 10 was significant (p=0.001) in the ketogenic group for weight, body fat percentage, BMI, HgA1c and ketones.  All variables for the ketogenic group out-performed those of the exercise and non-exercise groups, with five of the seven demonstrating statistical significance.

Ketone Bodies – aren’t those acids instead of proteins?

As you can see it’s good to go to the references. You always learn something. Had you heard of maple syrup urine disease (MSUD) before this? Isn’t MSUD a rare genetic disease in which amino acids aren’t properly processed rather than fatty-acid metabolism? Low-carb enthusiasts would probably agree with the following definition of ketosis. However, it is under ketone bodies in MeSH.

Ketosis – following the MeSH tree. Is it a disease?

Is ketosis a nutritional state or metabolic disease? Is it a healthy sign of metabolic flexibility? Should it be moved out of the category of Metabolic Diseases?

However, a recent study points out the important therapeutic properties of ketone bodies.9

In addition to acting as an alternative energy source, β-HB (β-hydroxybutyrate) is also a potent metabolite that regulates cellular signals by targeting diverse biomolecules. β-HB is a tiny molecule that can easily pass through cell membranes and circulate throughout the body in the blood vessels, even reaching the brain through the blood-brain barrier (BBB). This feature provides an advantage to β-HB over other existing drugs for the treatment of neurological diseases.

Low-carb enthusiasts would agree with MeSh. Ketosis is preferred.

Precision or accuracy, does it matter in nutrition?

In shooting firearms, precision is hitting the same spot over and over. Accuracy is hitting the target. If nutrition is not both precise and accurate, can it have the intended results? If we lack language to describe the processes involved in shifting into the fasted state as healthy, won’t that affect medical recommendations? Ketosis is measurable with handheld devices and its salubrious effects are enjoyed by thousands. Is it time to stop classifying it as a metabolic illness?

Bio-individuality may result in different reactions to dietary interventions.

Since individual differences make it difficult to control the optimal circulating β-HB levels by calorie restriction or a ketogenic diet, it is necessary to develop adjustable treatment options, such as KE (ketone ester) administration. As abrupt changes in circulating β-HB may disrupt energy homeostasis, the chiral enantiomer s-β-HB may offer a potential option for therapeutics, as this molecule cannot be used as an alternative energy metabolite.

Human biodynamics cannot be mass-produced or easily replicated. Bio-individuality requires adaptation of general practices for each person’s body. Therefore, for personalized nutrition, accuracy and precision matter even more than in factory products. We have the tools to measure ketone bodies and their beneficial effects. Doctors use therapeutic ketogenic diets to alleviate mental and metabolic conditions. Let’s take the term ketosis out of the dog house and bring it into the living room.

How do you differentiate between ketosis and ketoacidosis?

Might clearing up these differences in how medical definitions are classified, facilitate constructive conversations among medical professionals? Might this added clarity benefit patients? Please let us know in the comments.

Where do I start improving my metabolic health?

This site uses Akismet to reduce spam. Learn how your comment data is processed.